Two ‘zero’ days in Winthrop, WA helped us regroup after our epic snowy expedition in the last 120 mile section.  And we got to visit with RavenSong a.k.a. Carolyn Burkhart the first woman to complete the PCT.  She is a trail angel and she just bought a house in Mazama, WA a month before.  And our hiker friend ‘Otter’ whom we had not seen since Sierra City, CA.  He had already crossed the border and come back to Mazama… twice!  Midnight Rider and Valentino the thru-horse were also there, trying to finish the last section to become the first woman to complete the trail with one horse in one year. 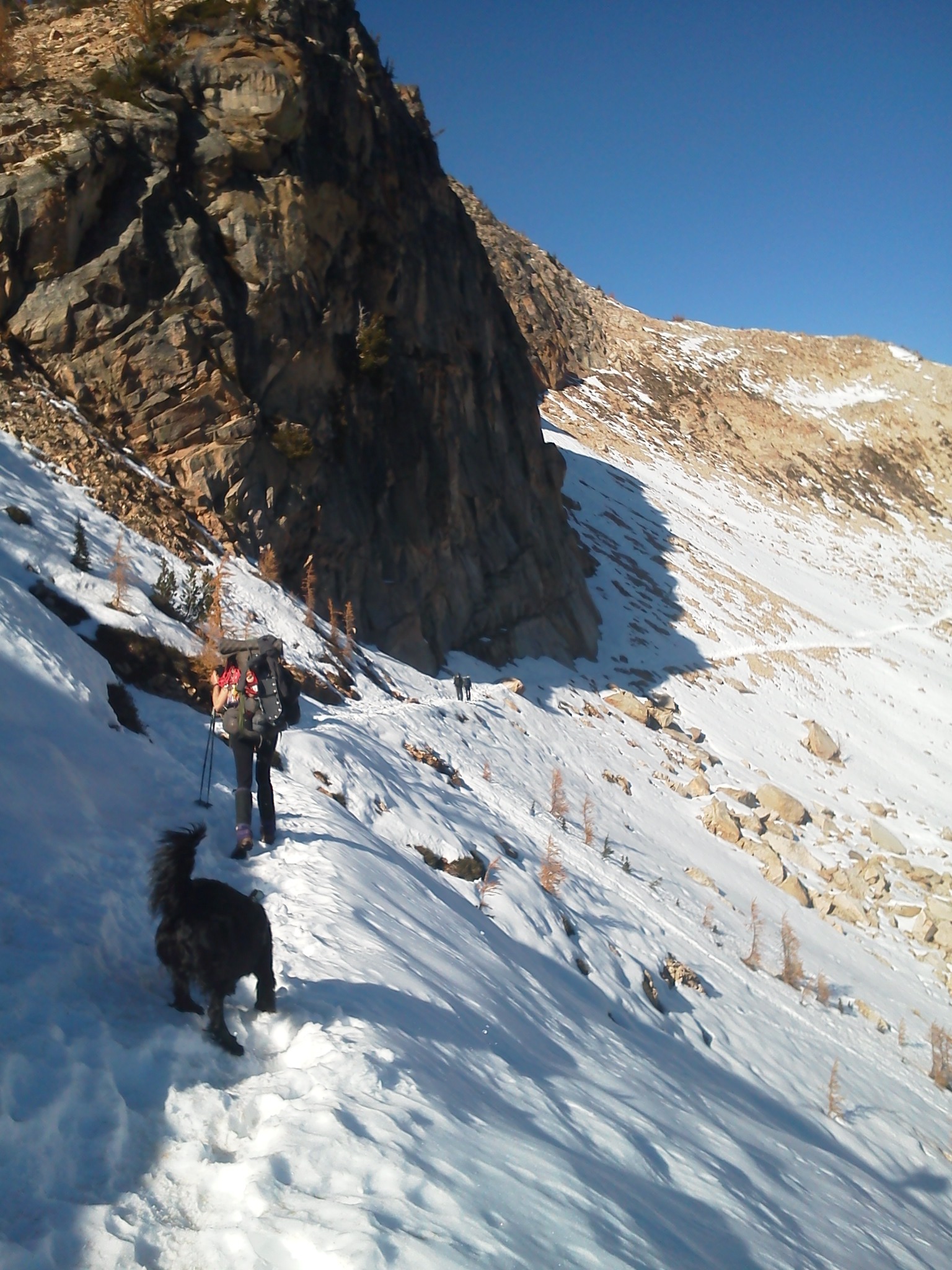 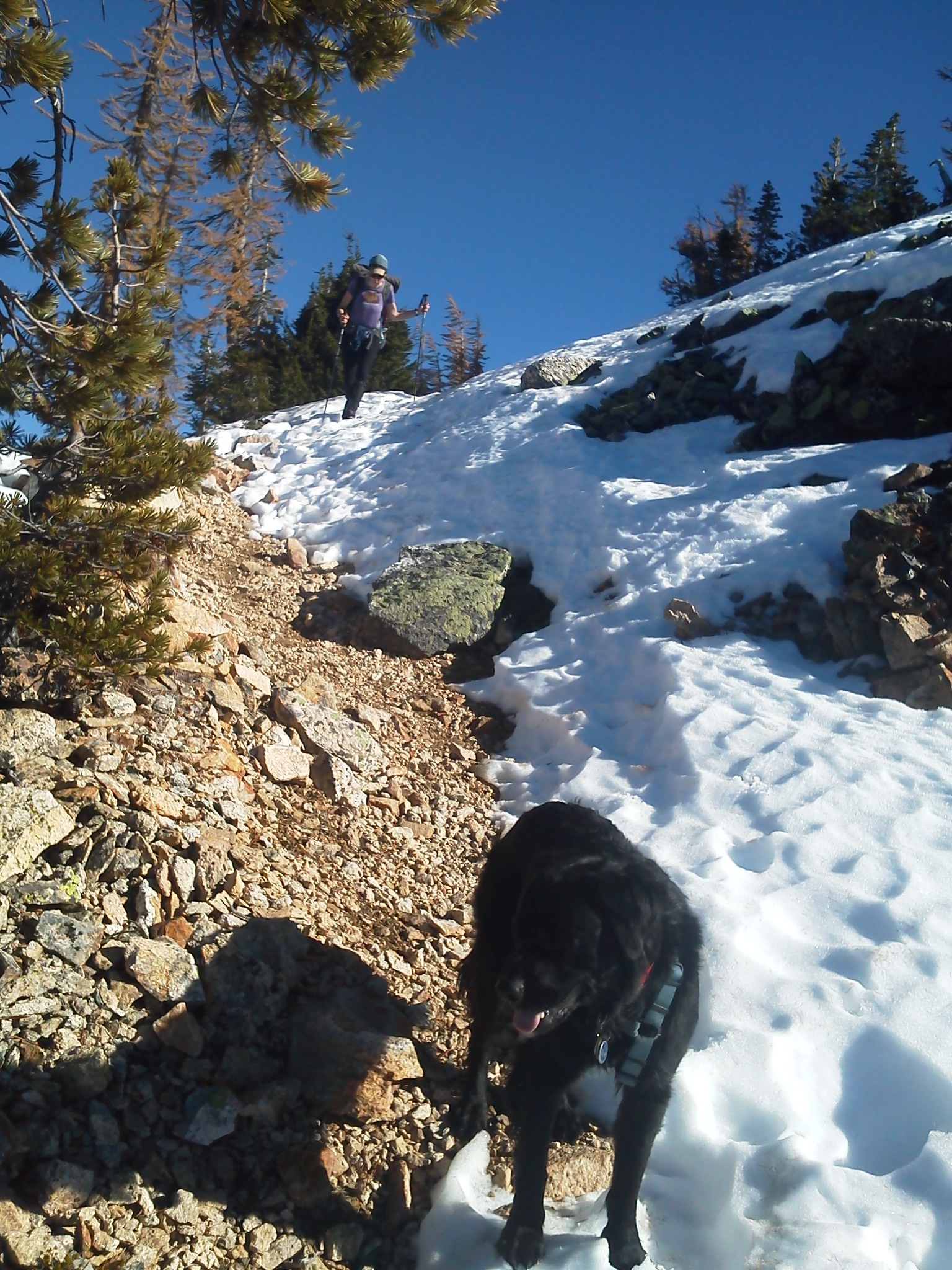 The snowshoes didn’t come in handy much in this section, but we did use our Micro Spikes almost every day.  By now, most of the snow had melted and froze, melted and froze, for days since it had first fallen. This made for slick and icy conditions on the hard snowpack where our light crampons were a crucial piece of gear. 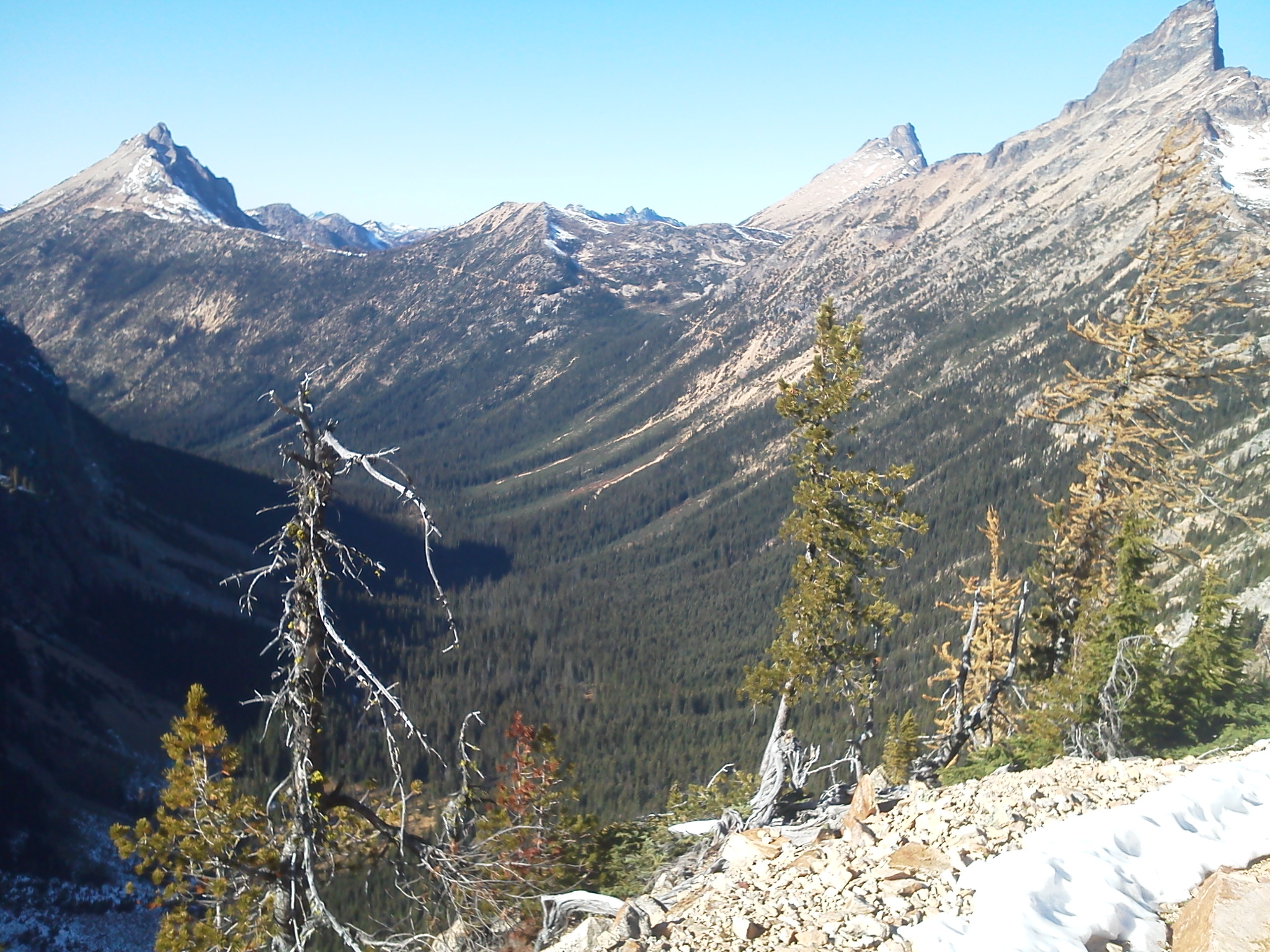 Our group now grew to 8 with Shot-put & Pepper Flake joining us.  In 4 days we powered through the final 60 mile section to the monument.  Midnight rider was coming in behind us, and there was several people there to help her dig out the trail for Valentino.  Hot Tub left a extra shovel behind to help.

Which way to Canada? its behind me.. see the trail cutting a line across the mountain? its nice to see where you’ll be in a hour or two.. 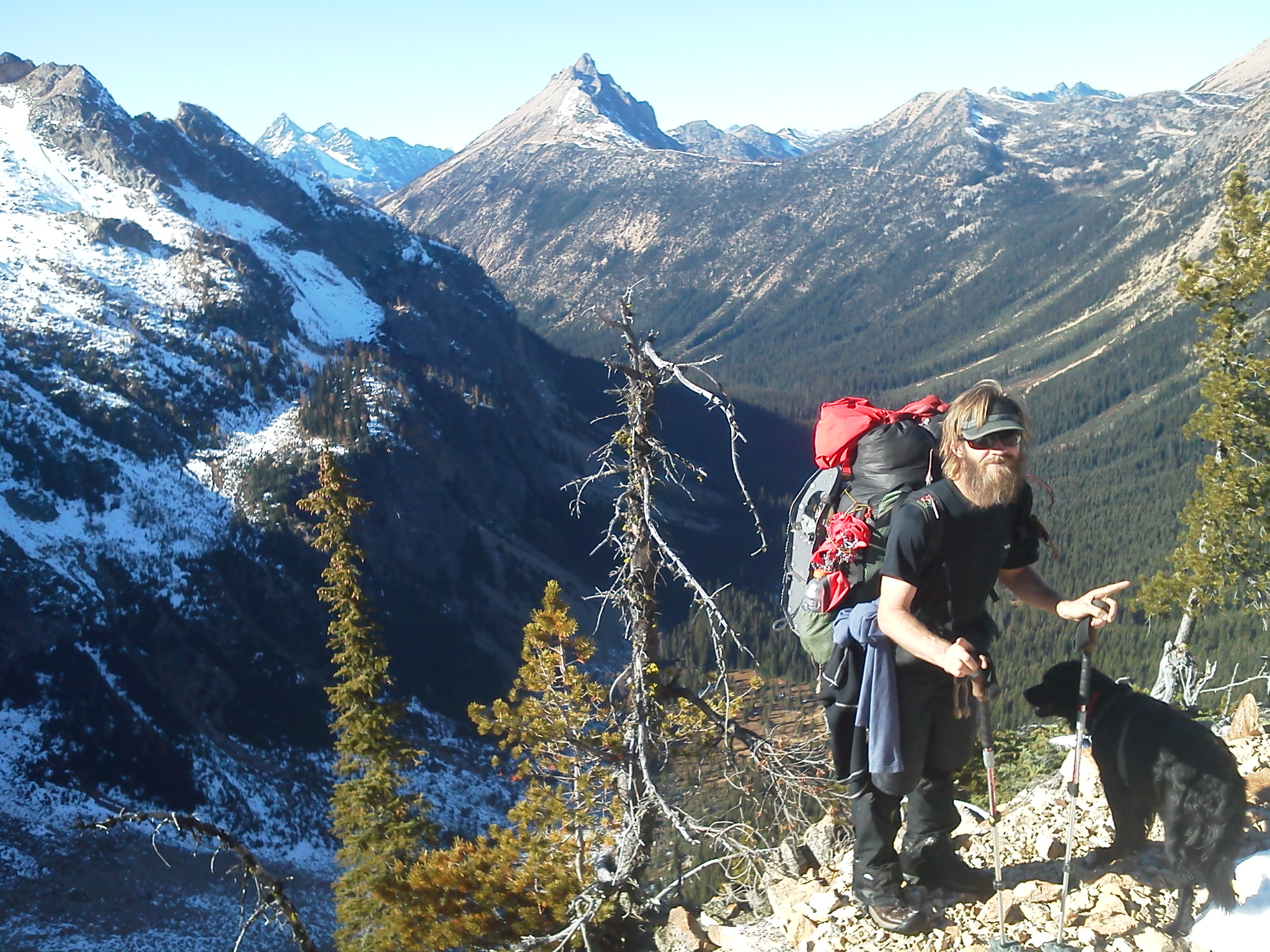 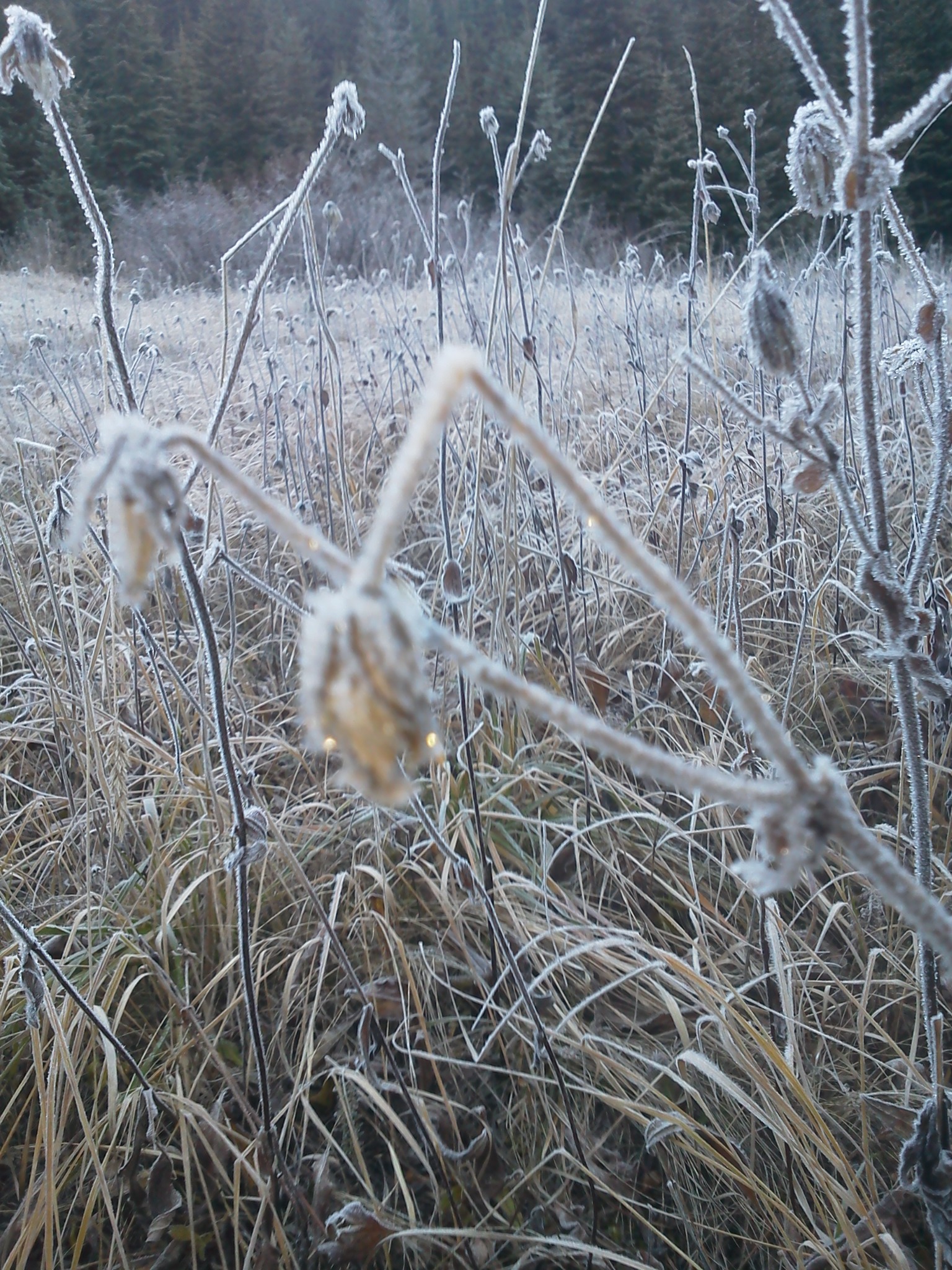 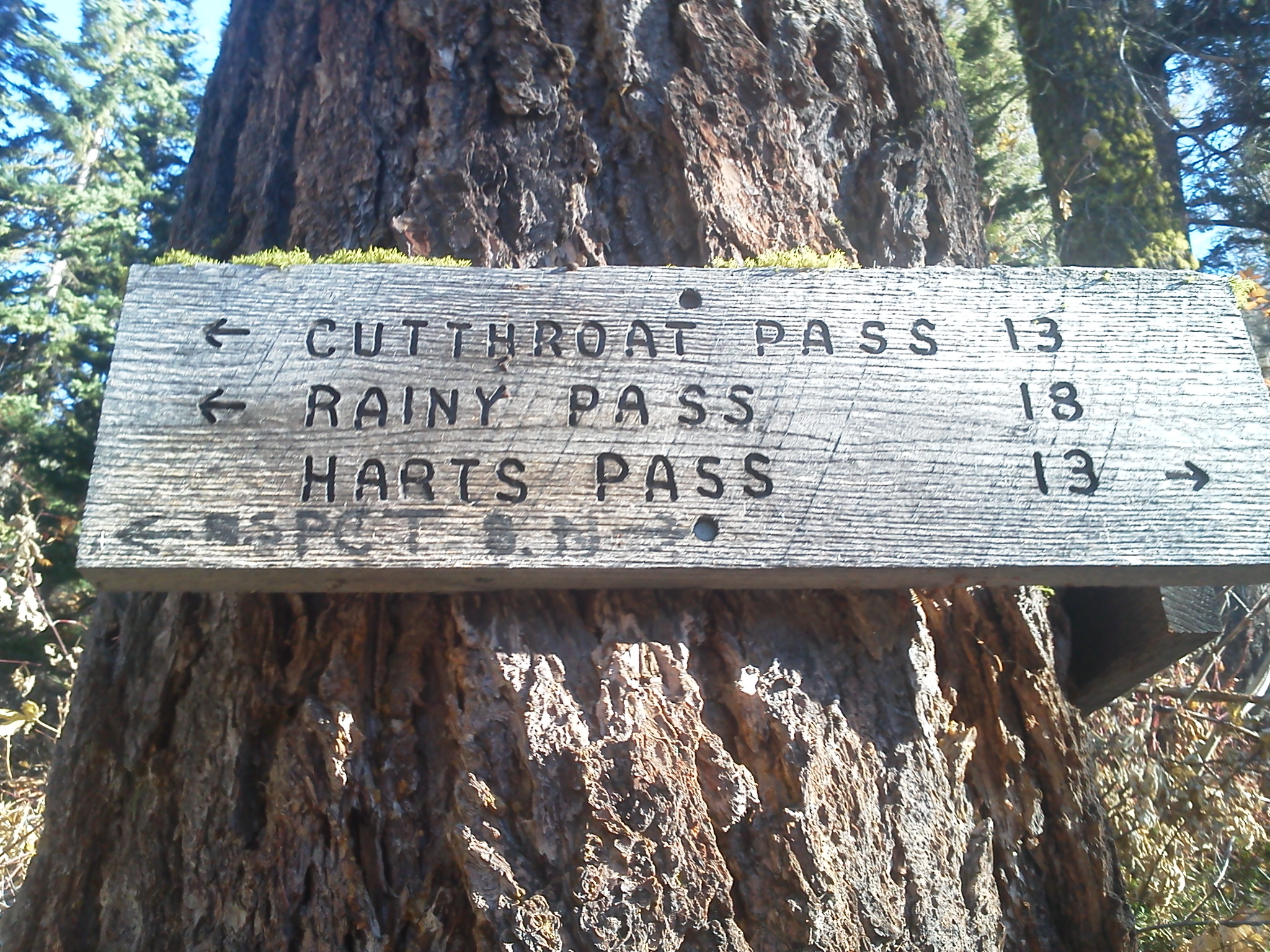 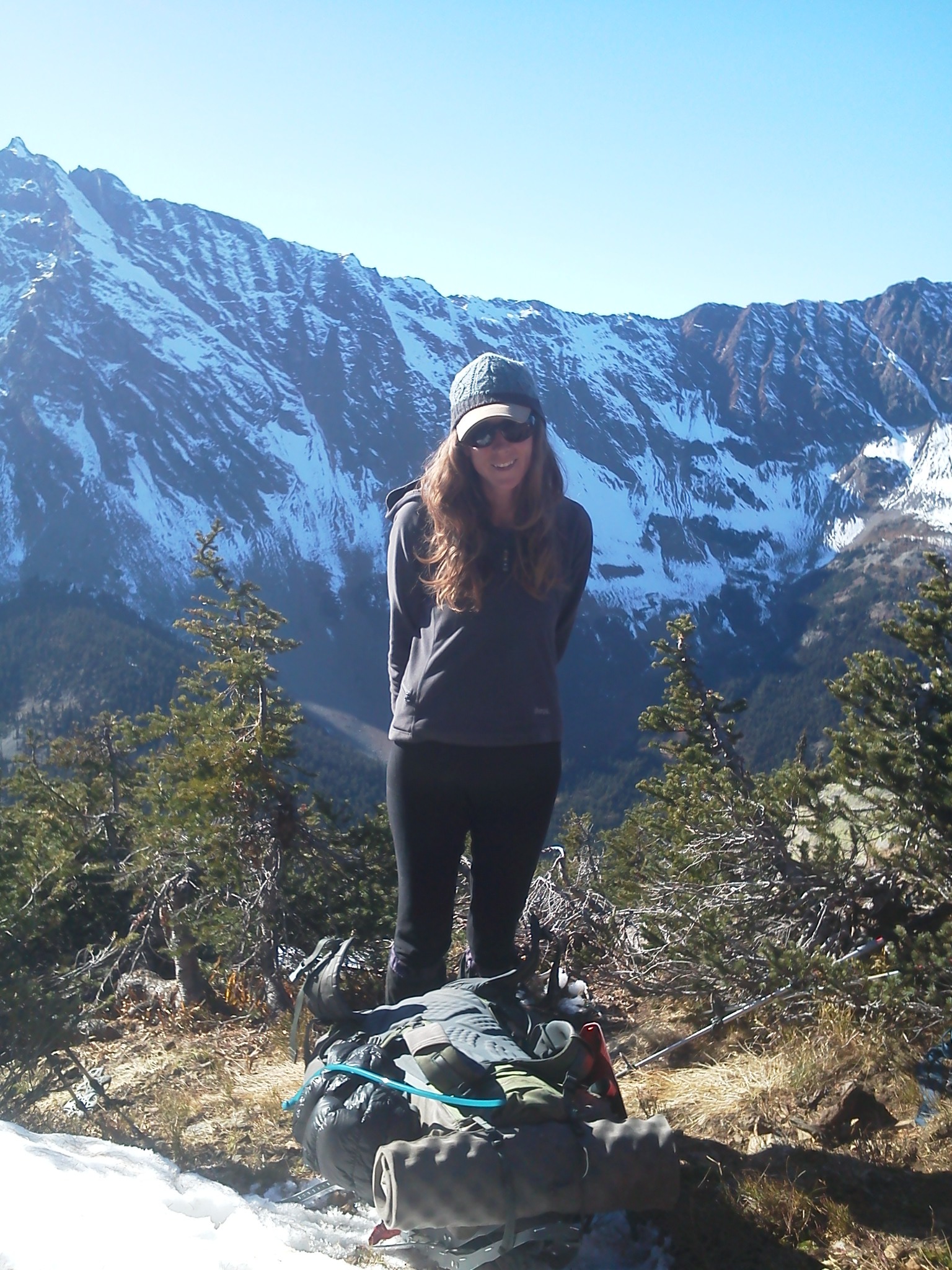 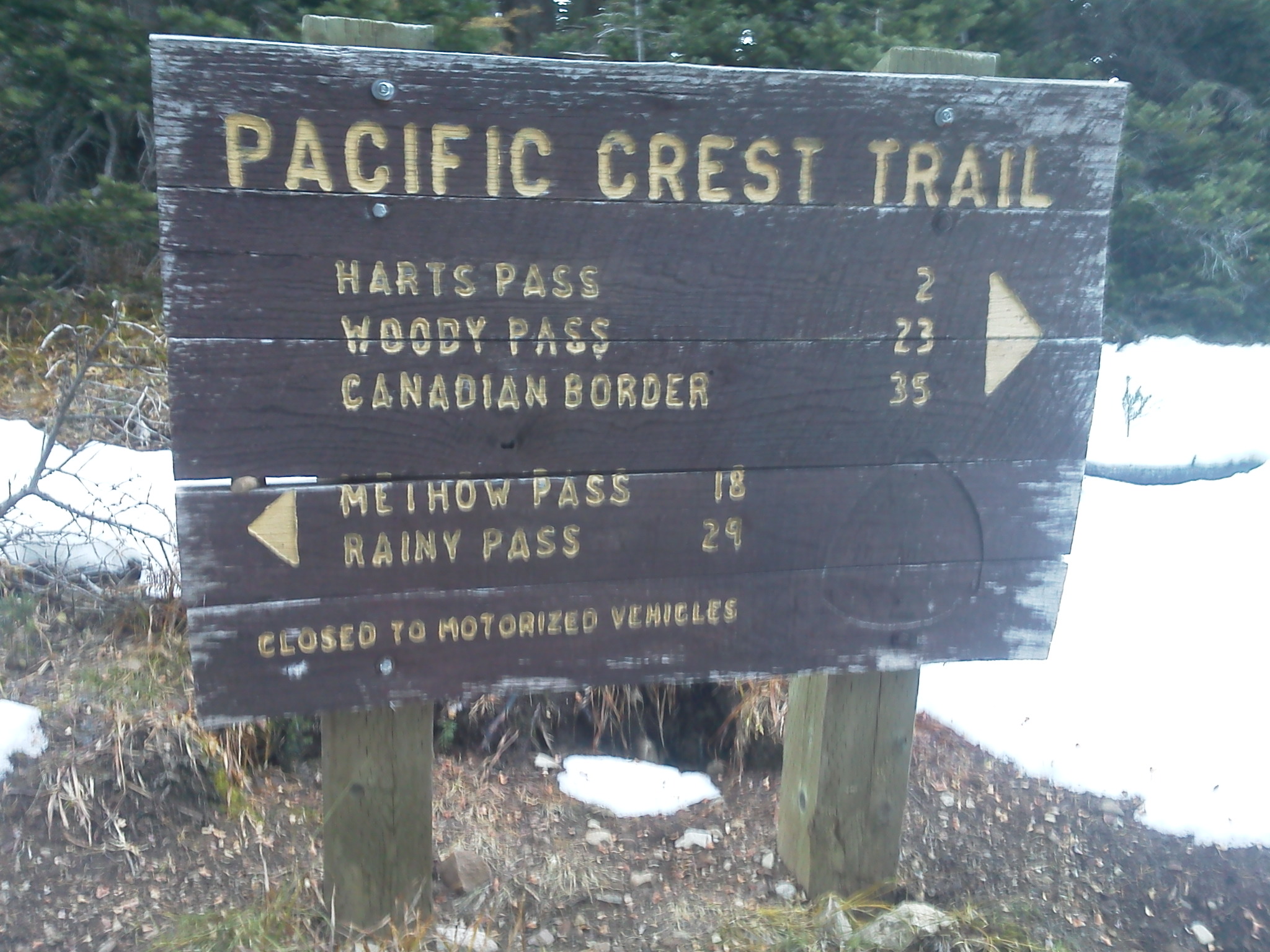 When we arrived at Hart’s pass, the last road out before the Canadian Border, Midnight Rider’s brother Cameron was there with a fire going and trail magic sent up by RavenSong.  Midnight Rider had to called out for more hay and shovels and they were planning at making another attempt the following day.  We continued on the trail and were met with warm weather and fall foliage on one side of a mountain, and snow and cold pockets on the other side. 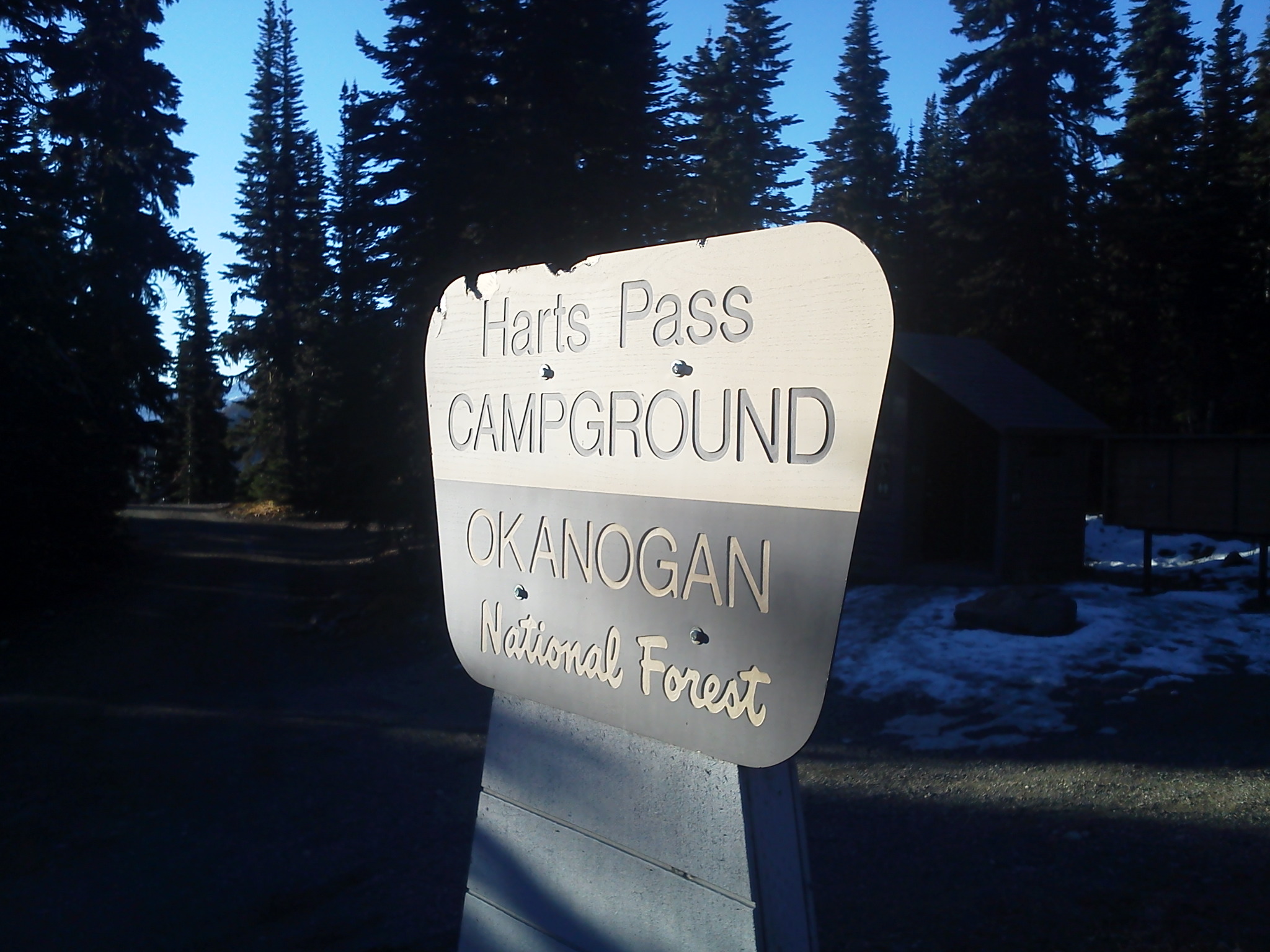 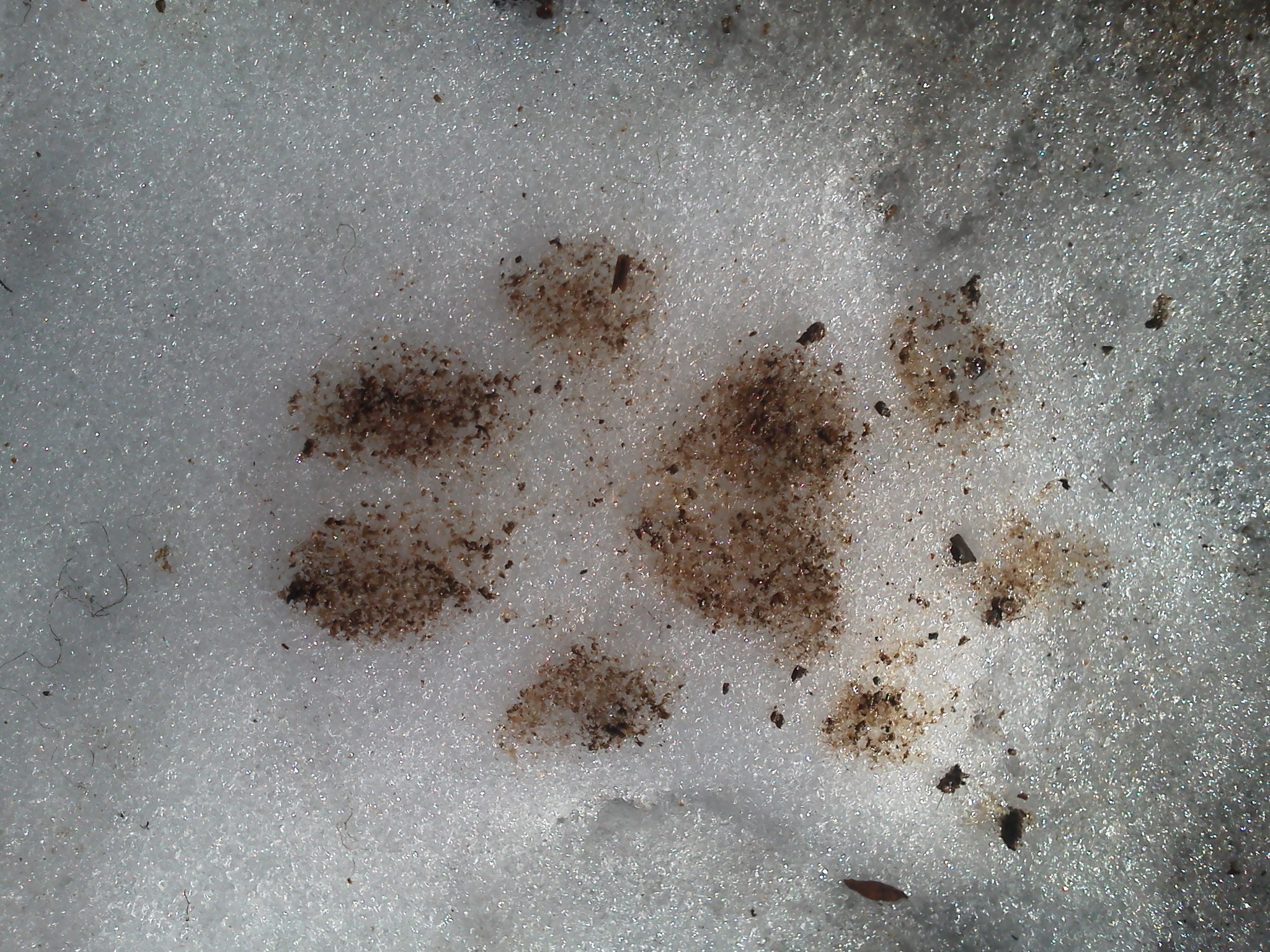 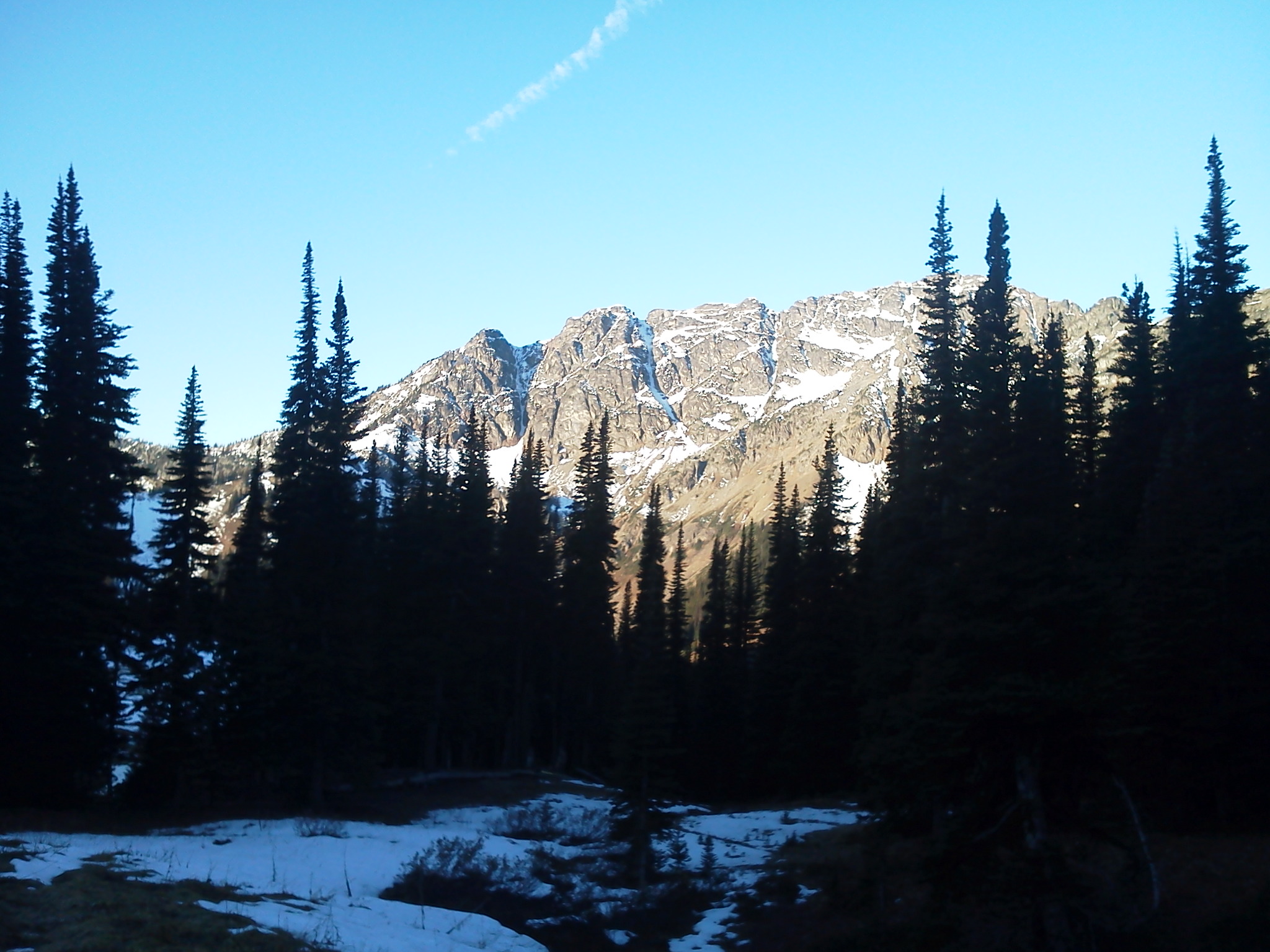 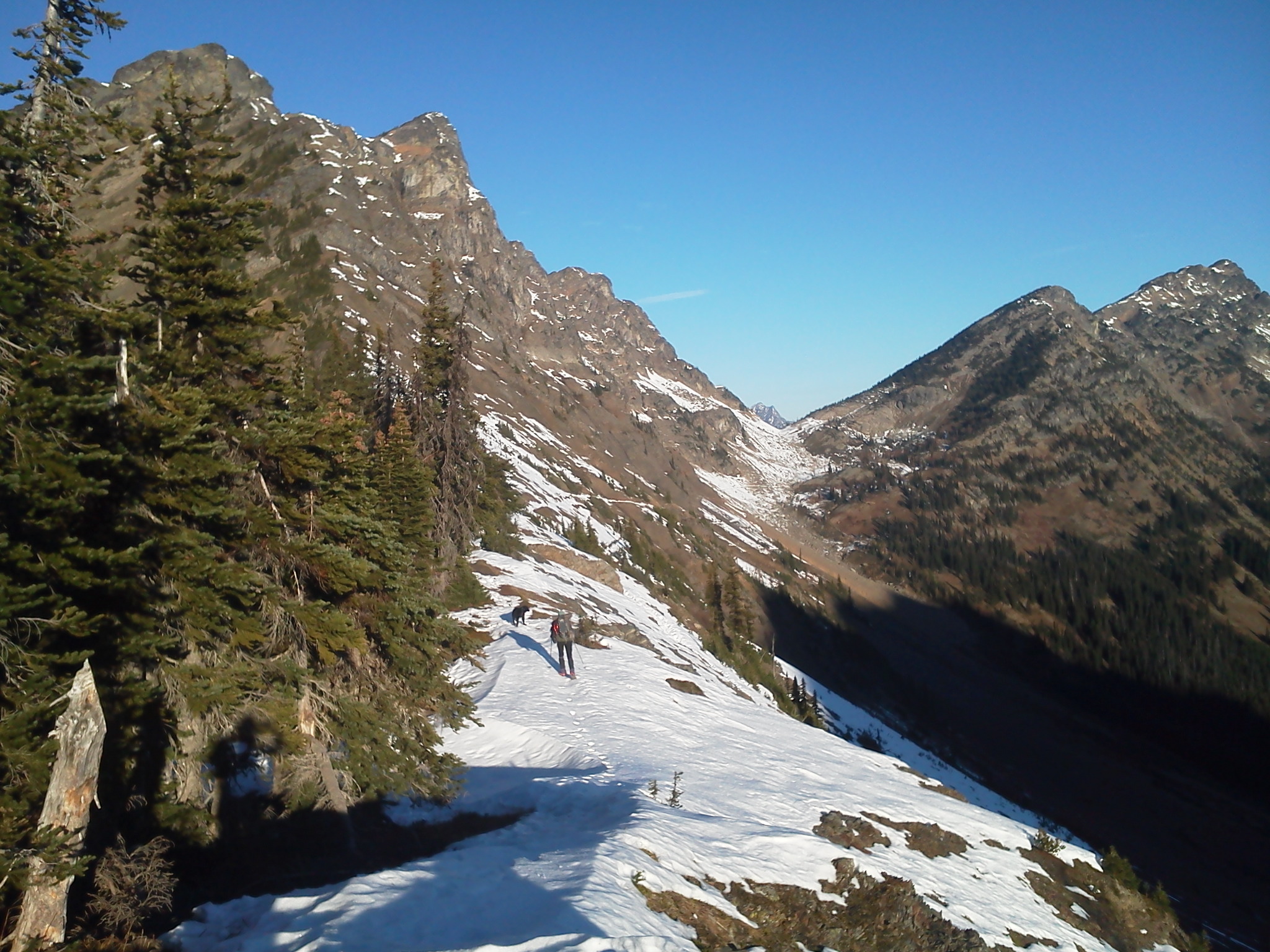 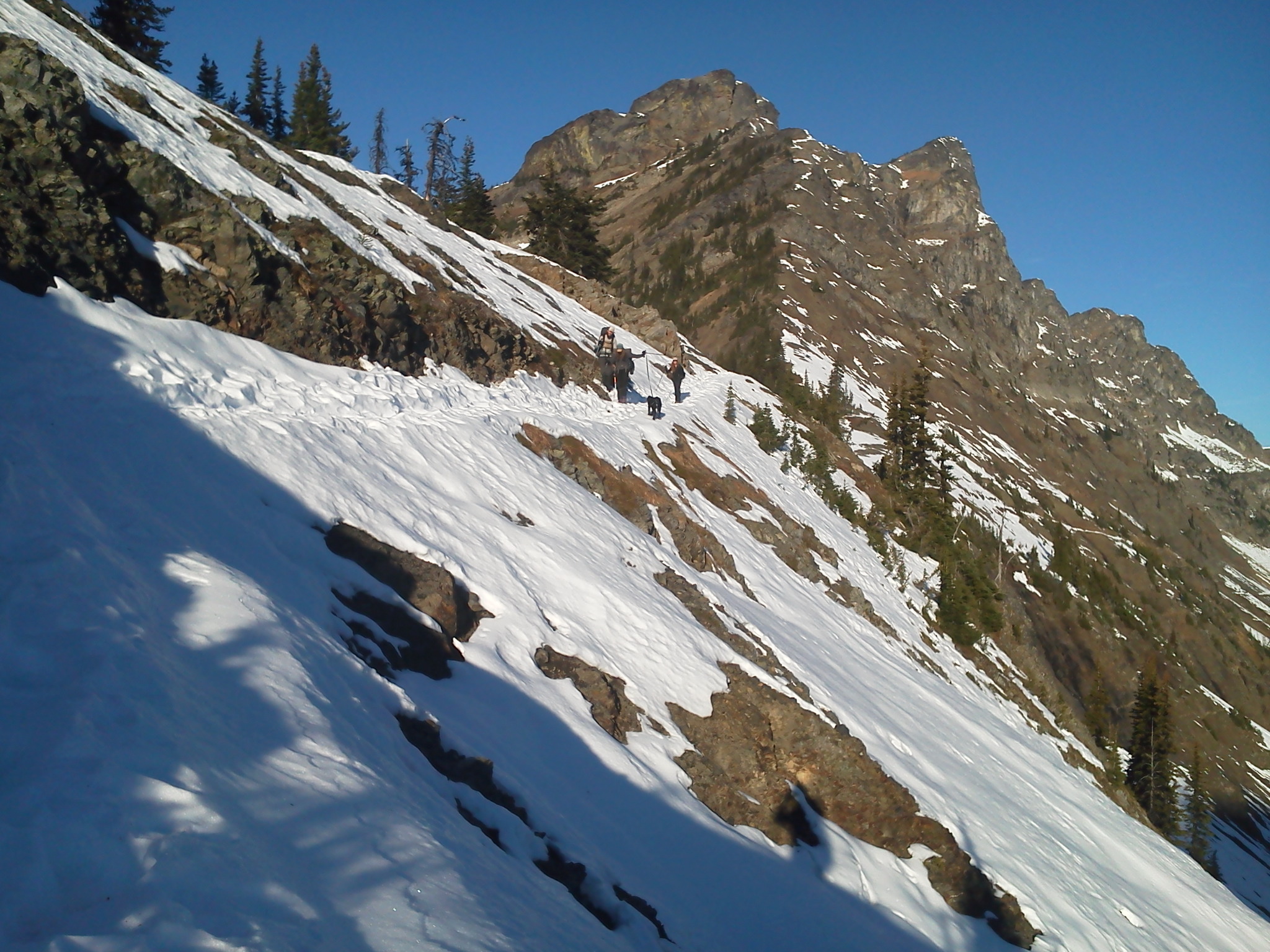 crossing the treacherous washouts, on hand and foot! 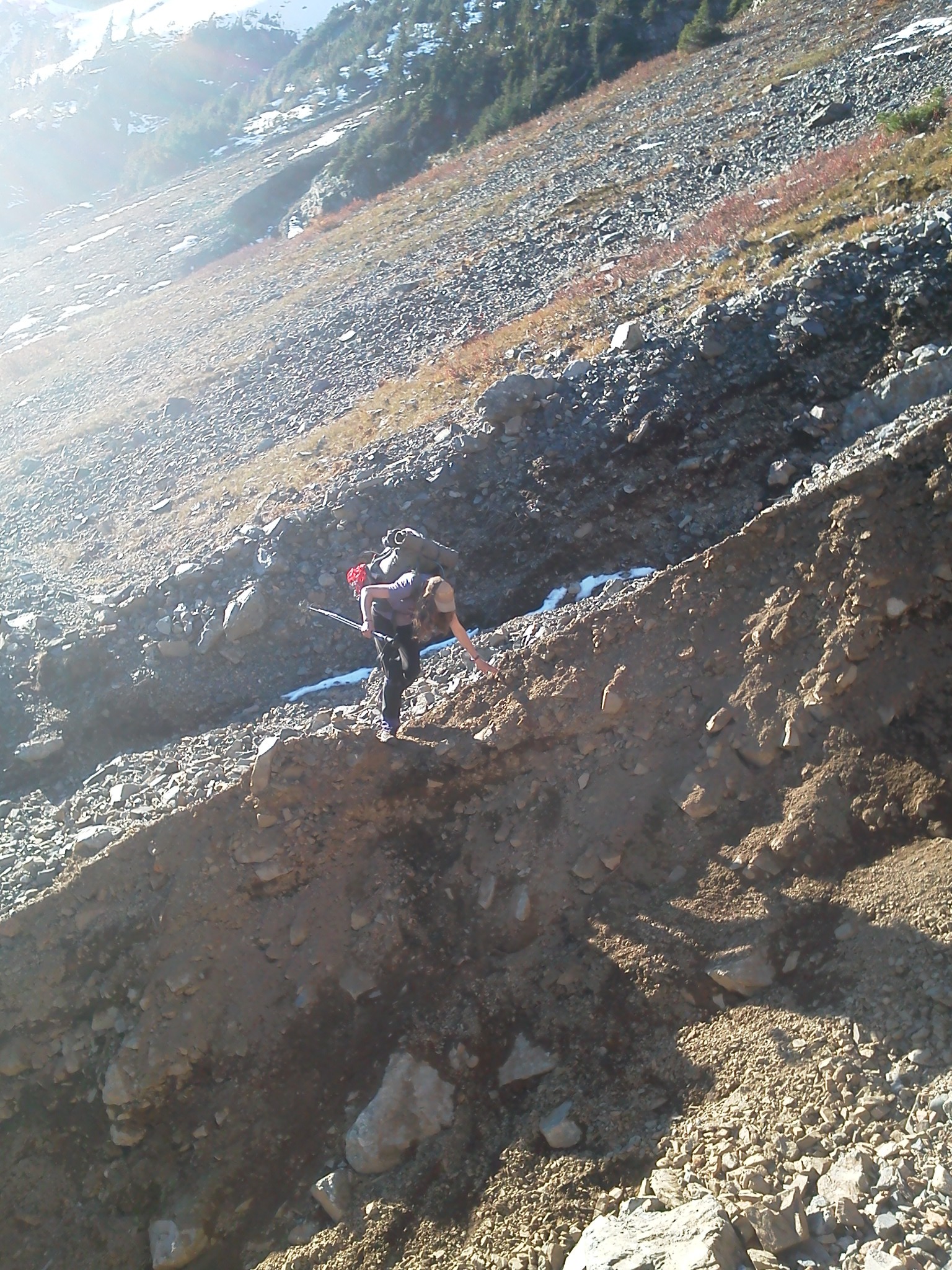 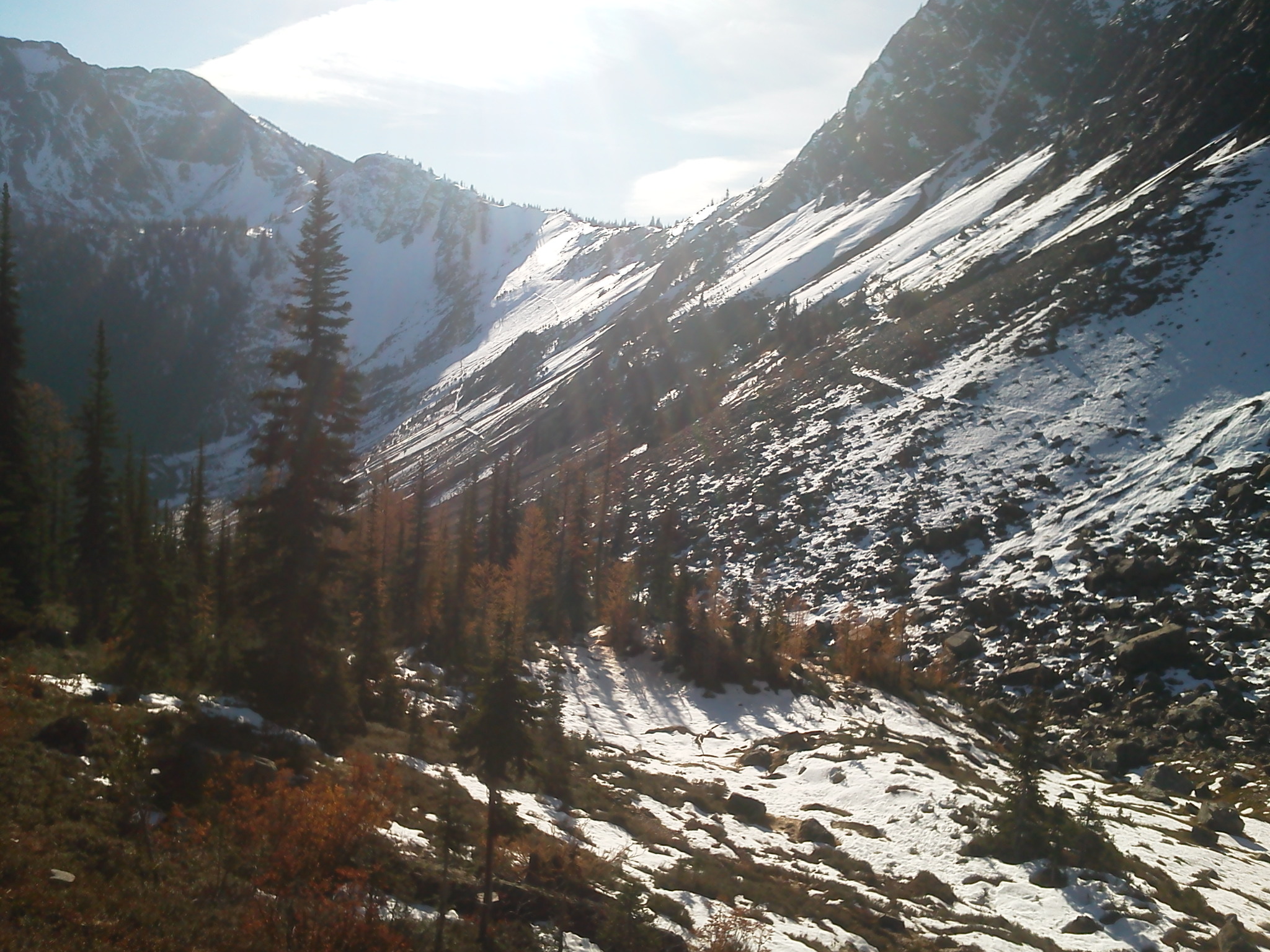 Lunch time! SupDog is probably eating his dehydrated food, mixed with peanut butter, cheese, and a lot of water.

We are probably eating ramen with broccoli and TVP… 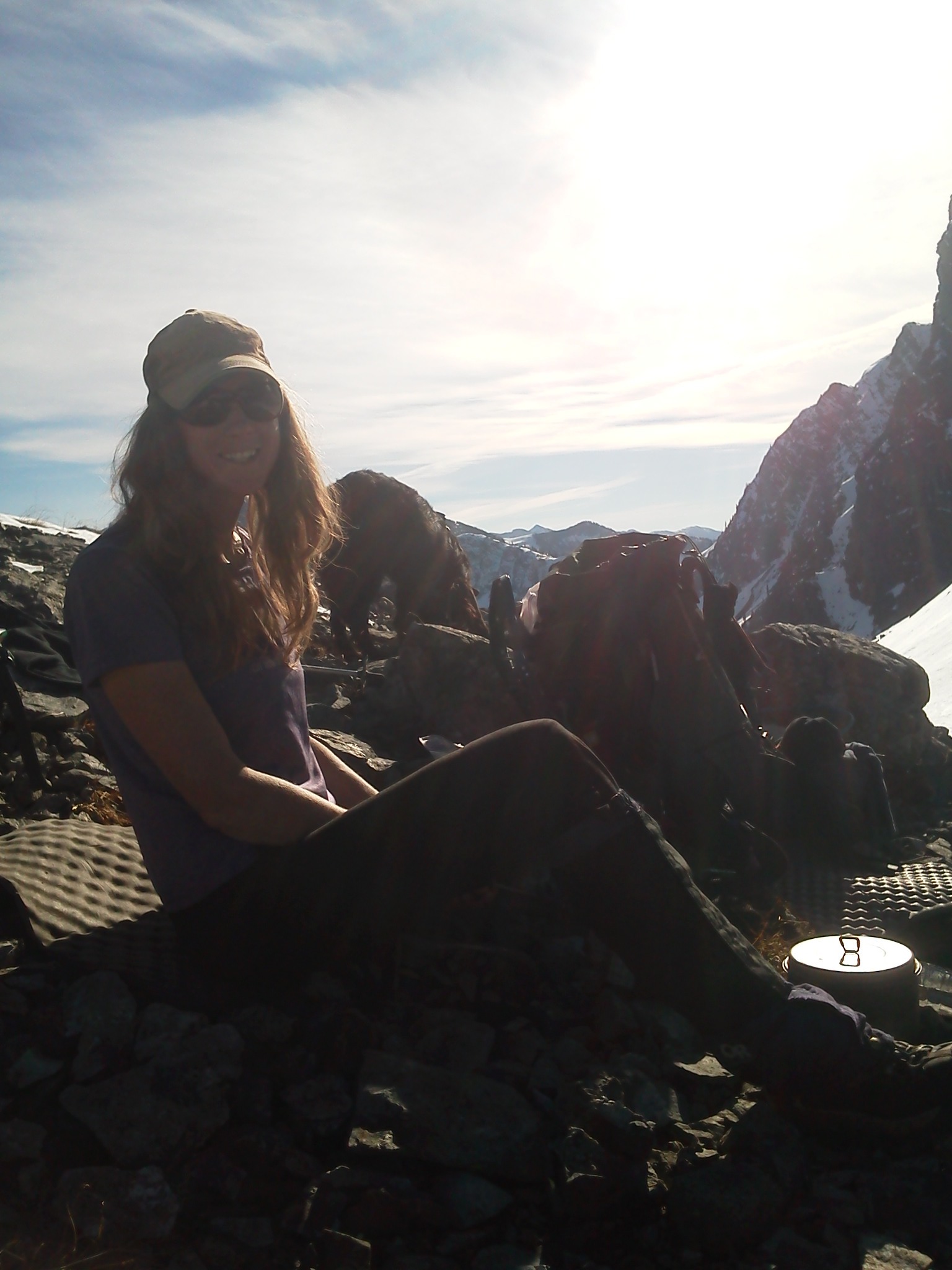 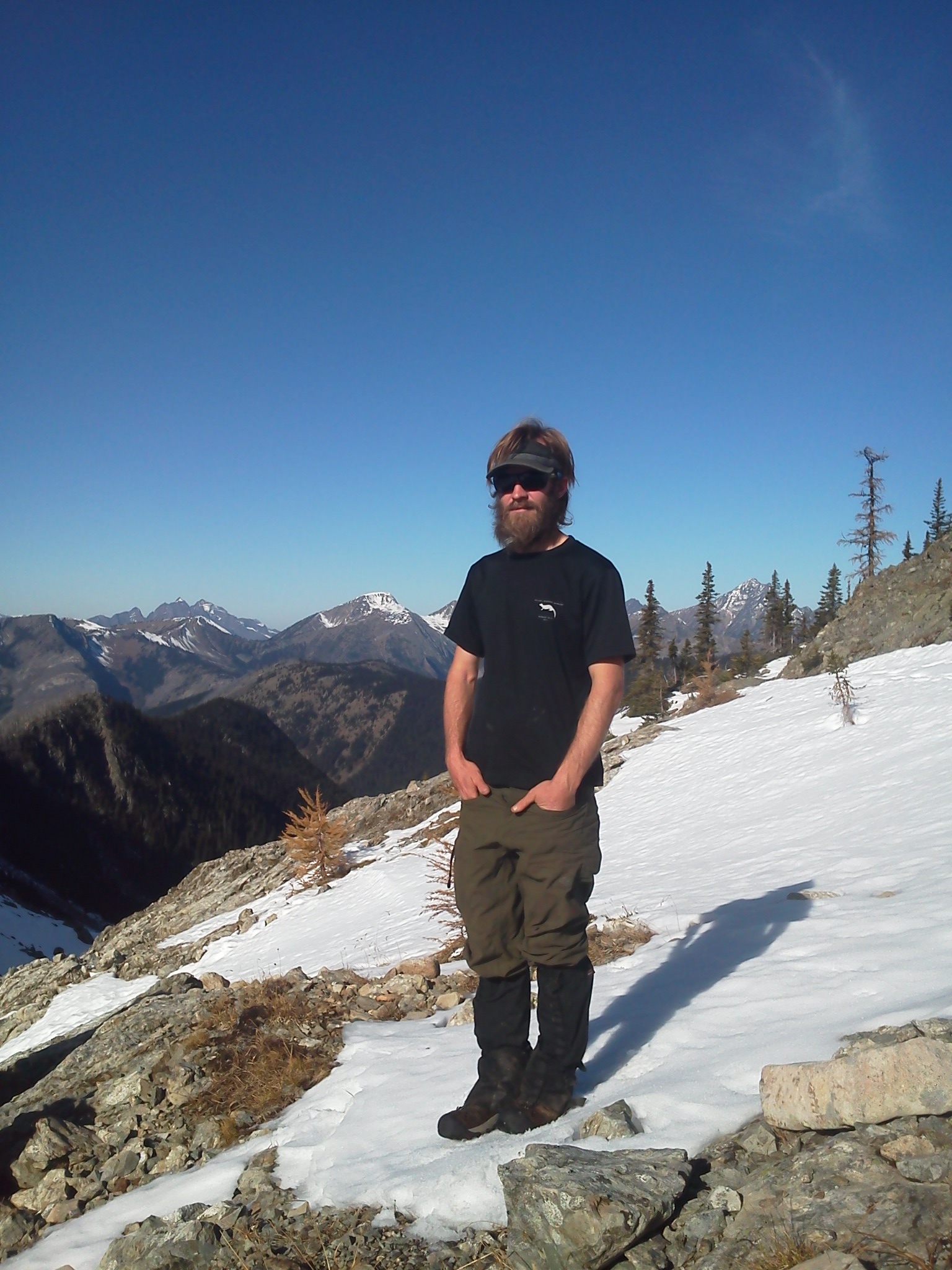 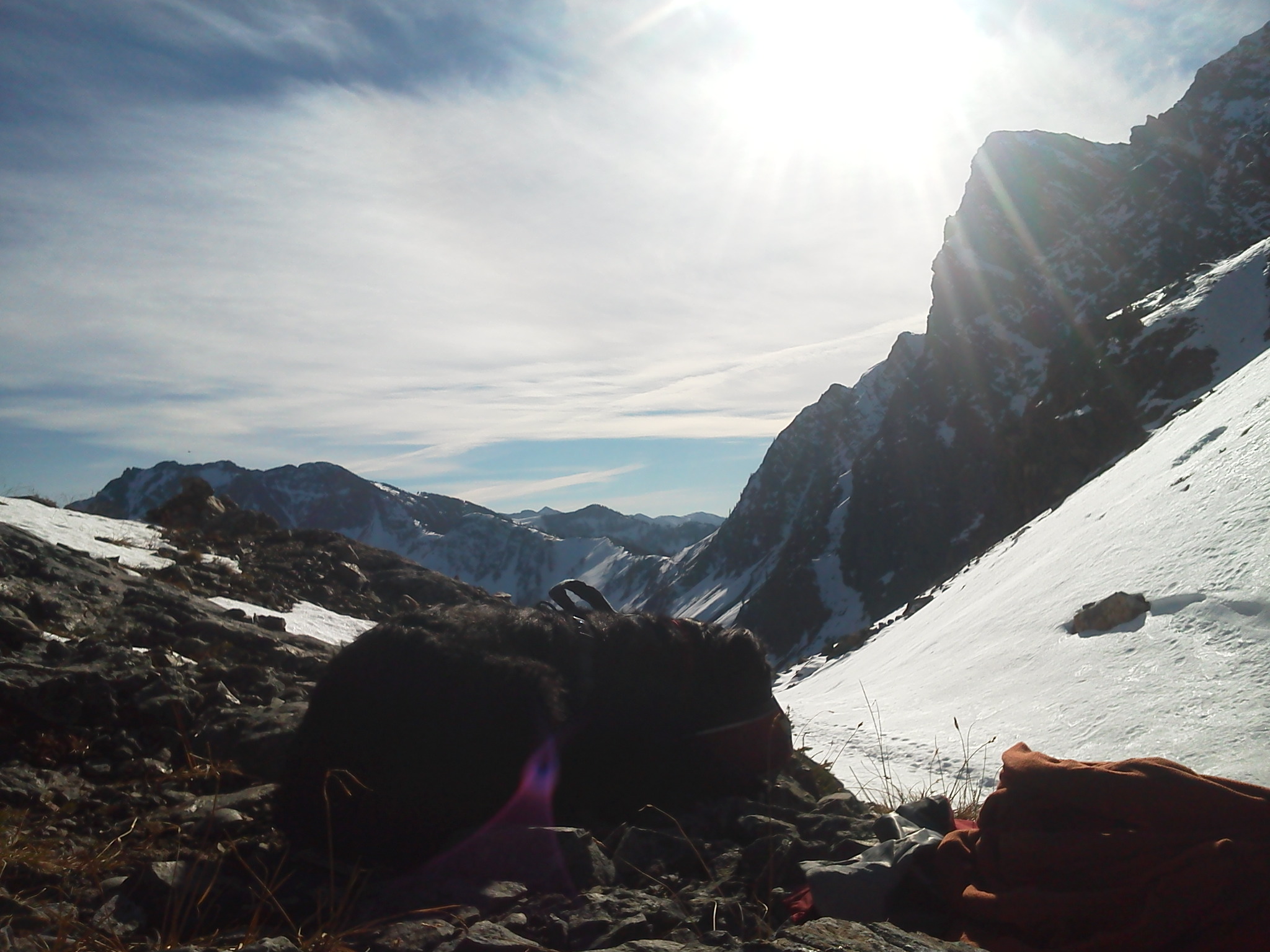 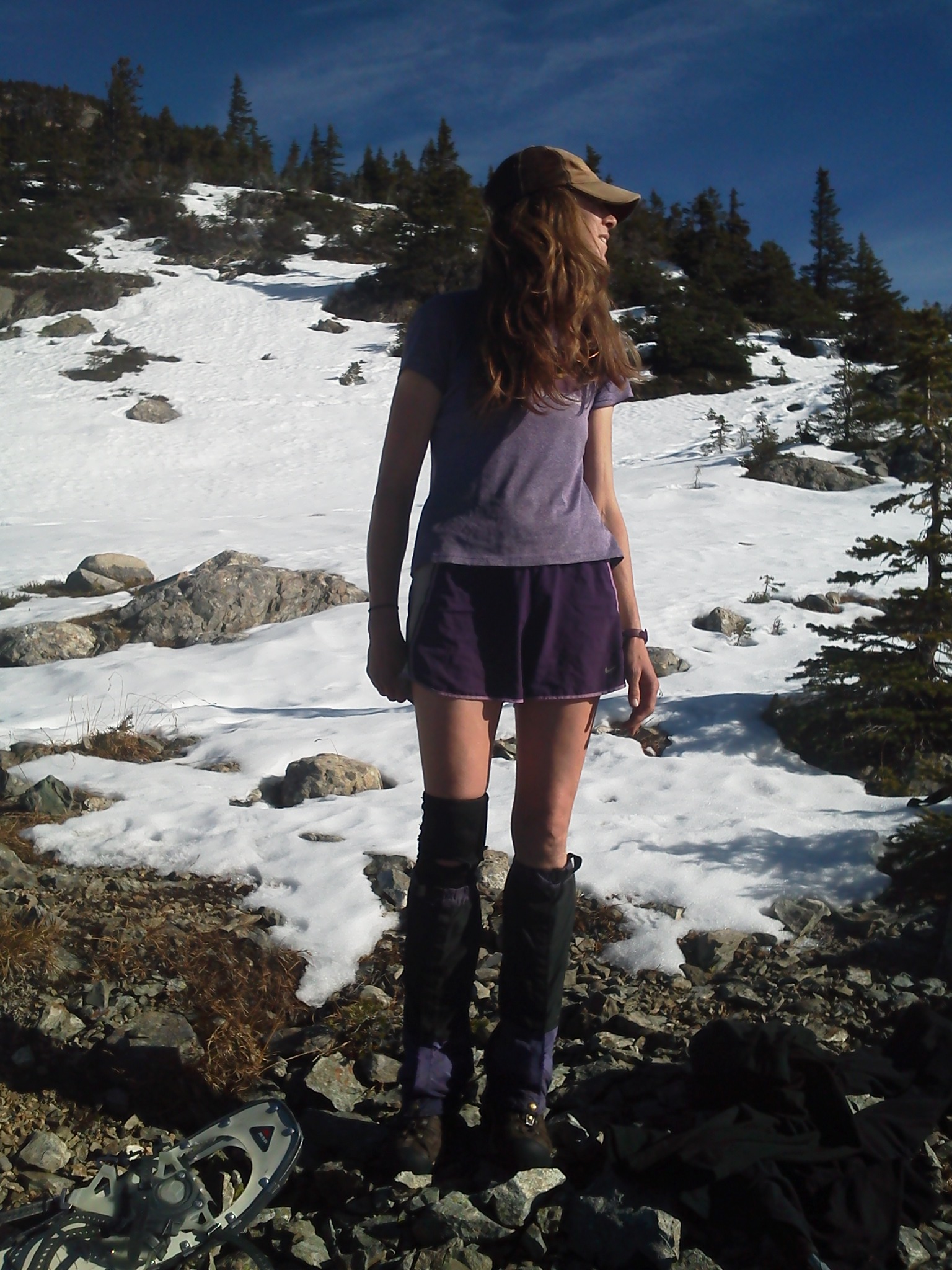 “Mini Snowman” … back dropped by the Canadian Mountains. 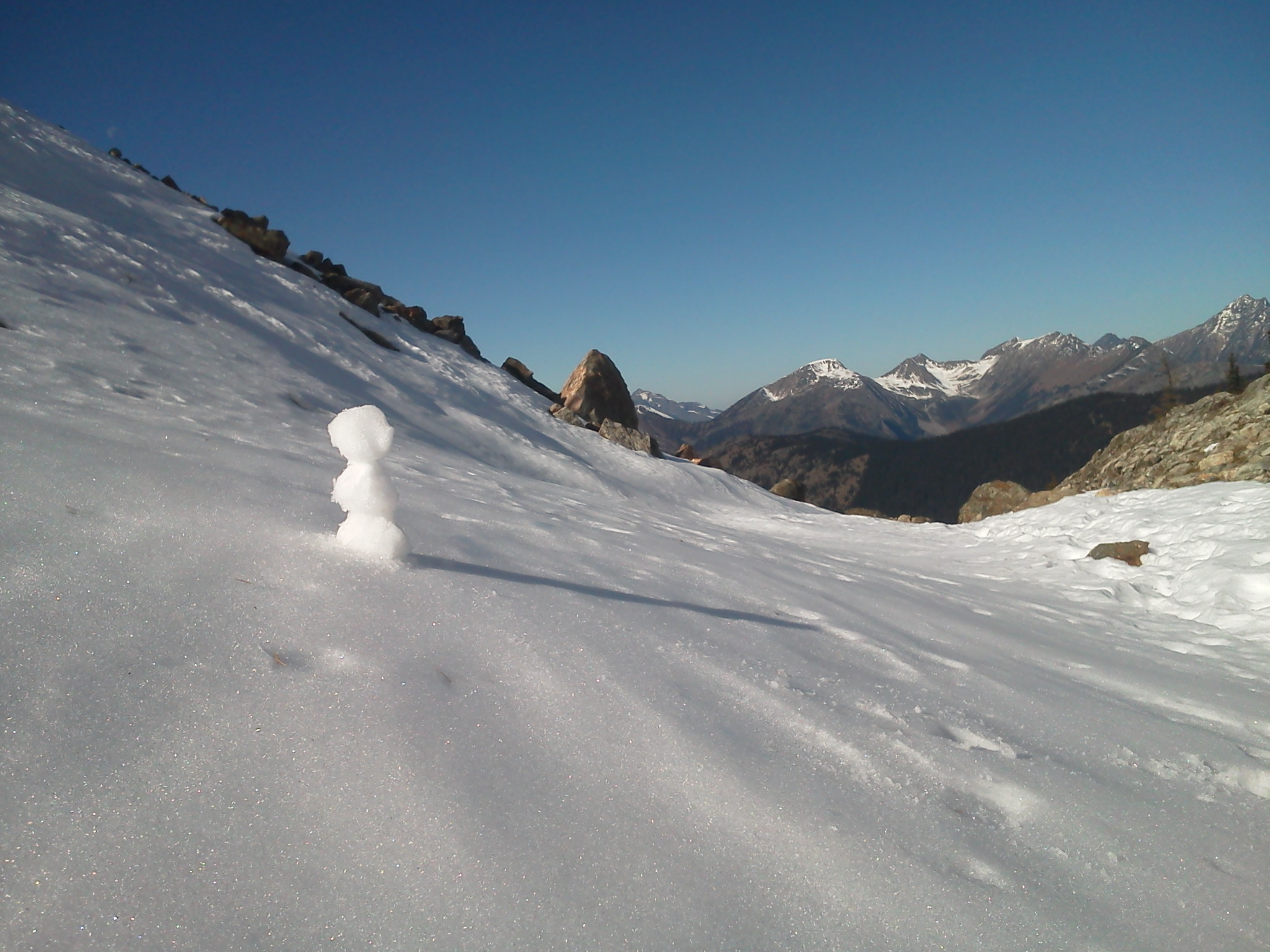 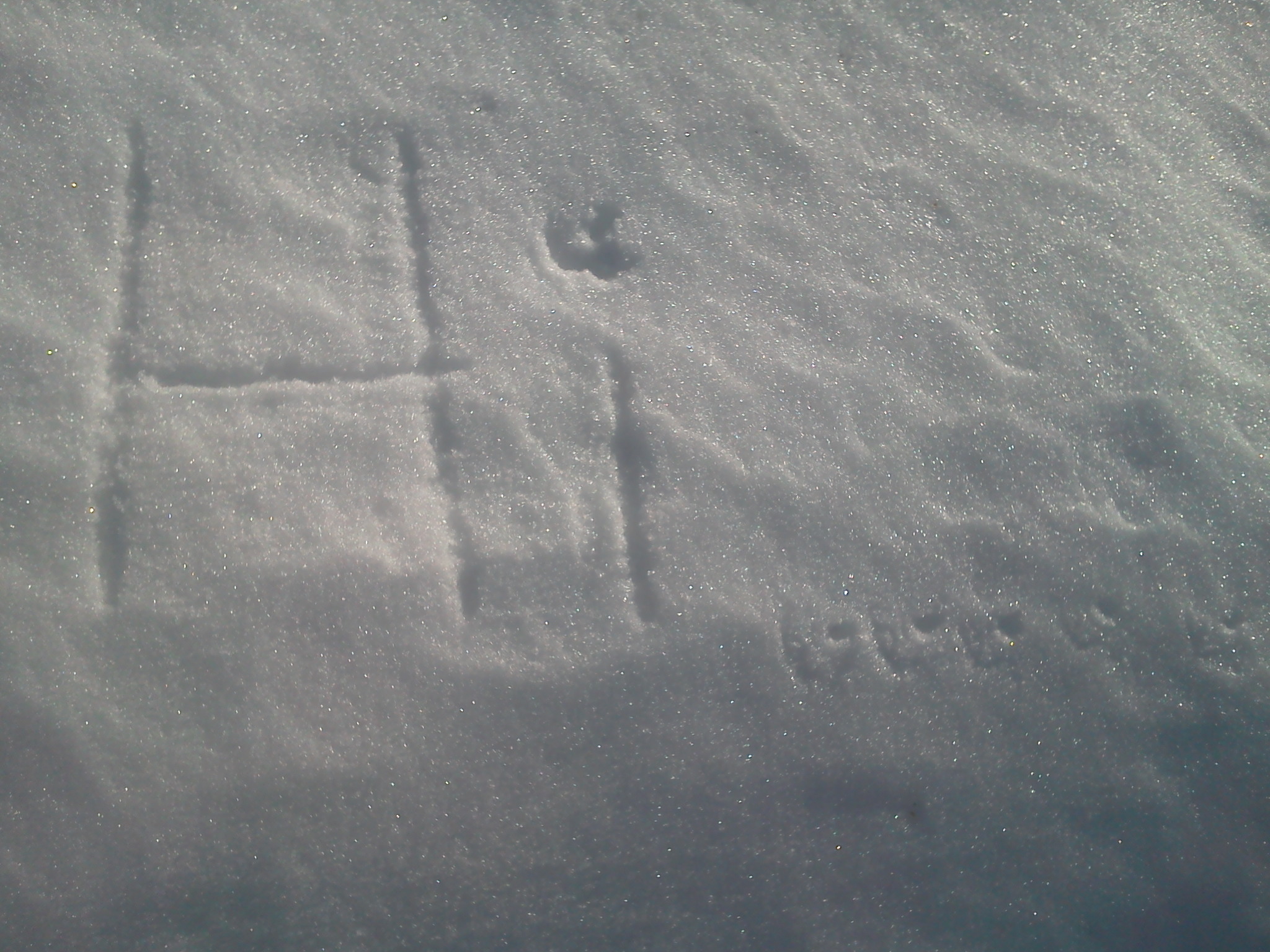 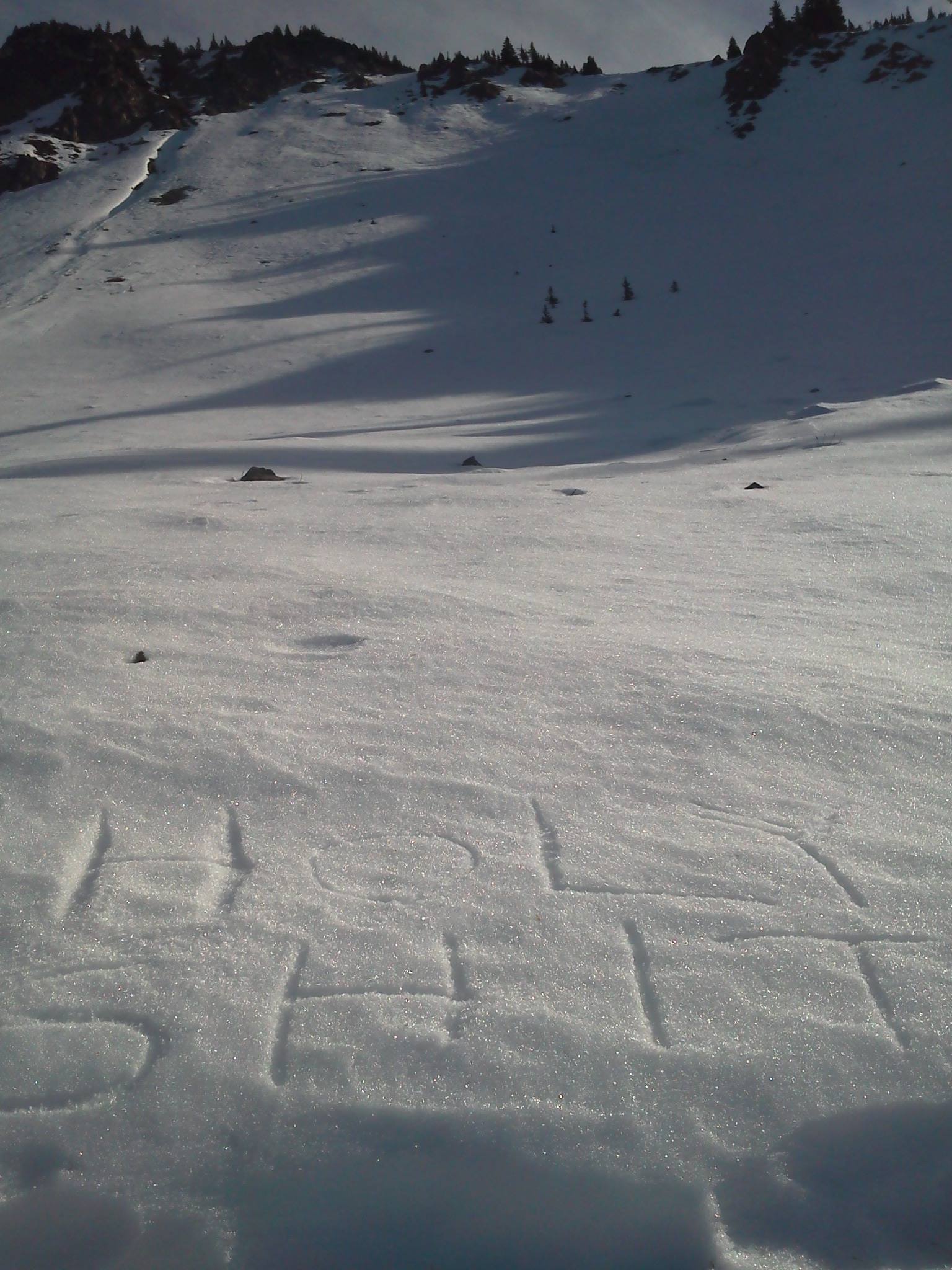 And then disaster strikes… major problem with Scott’s foot!

I hear the helicopter in the distance! We were able to duct tape the toe back on, but I am not sure he’s going to make it… 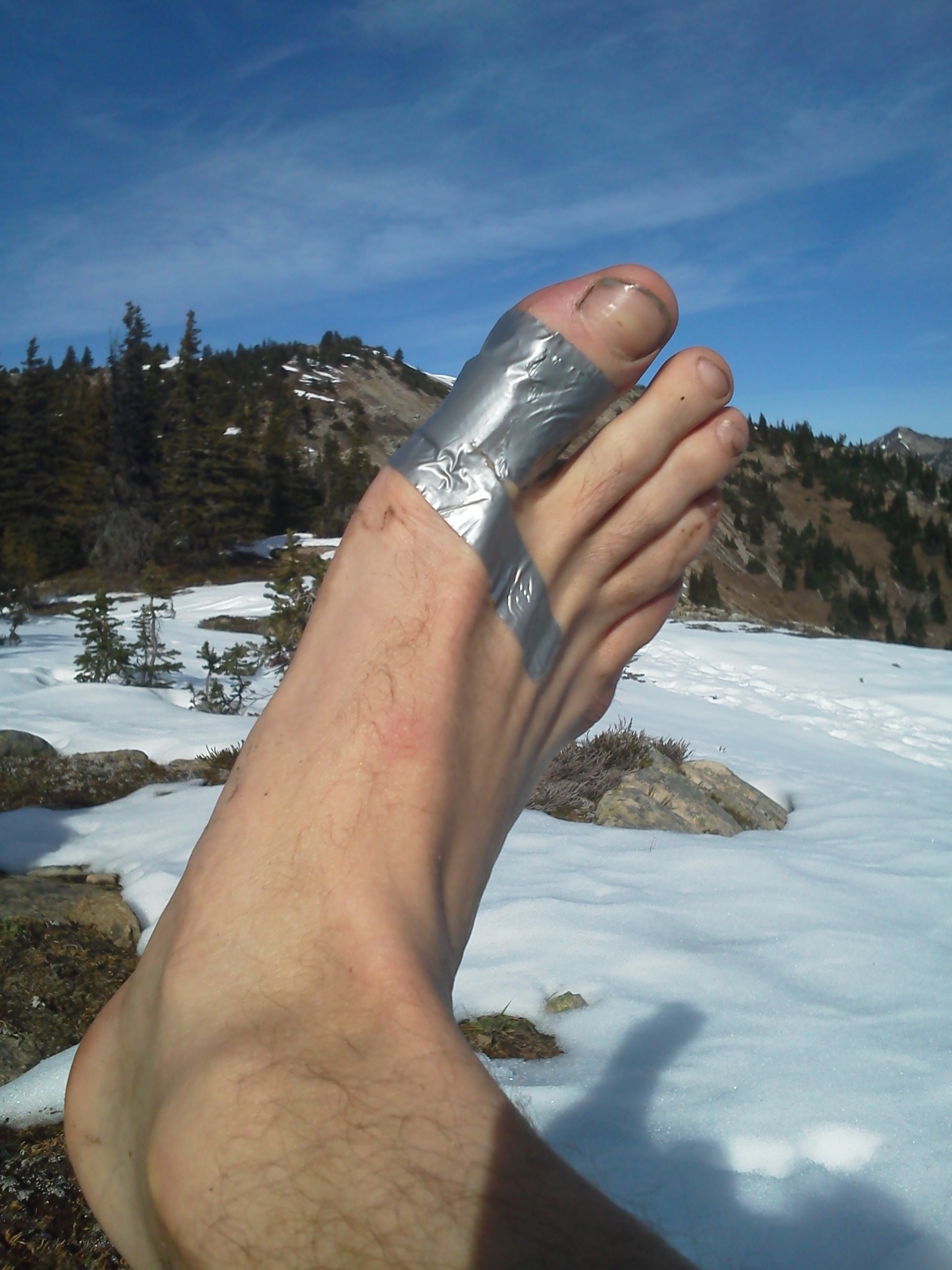 Just kidding! Not even the “worst blister ever” will stop us now! 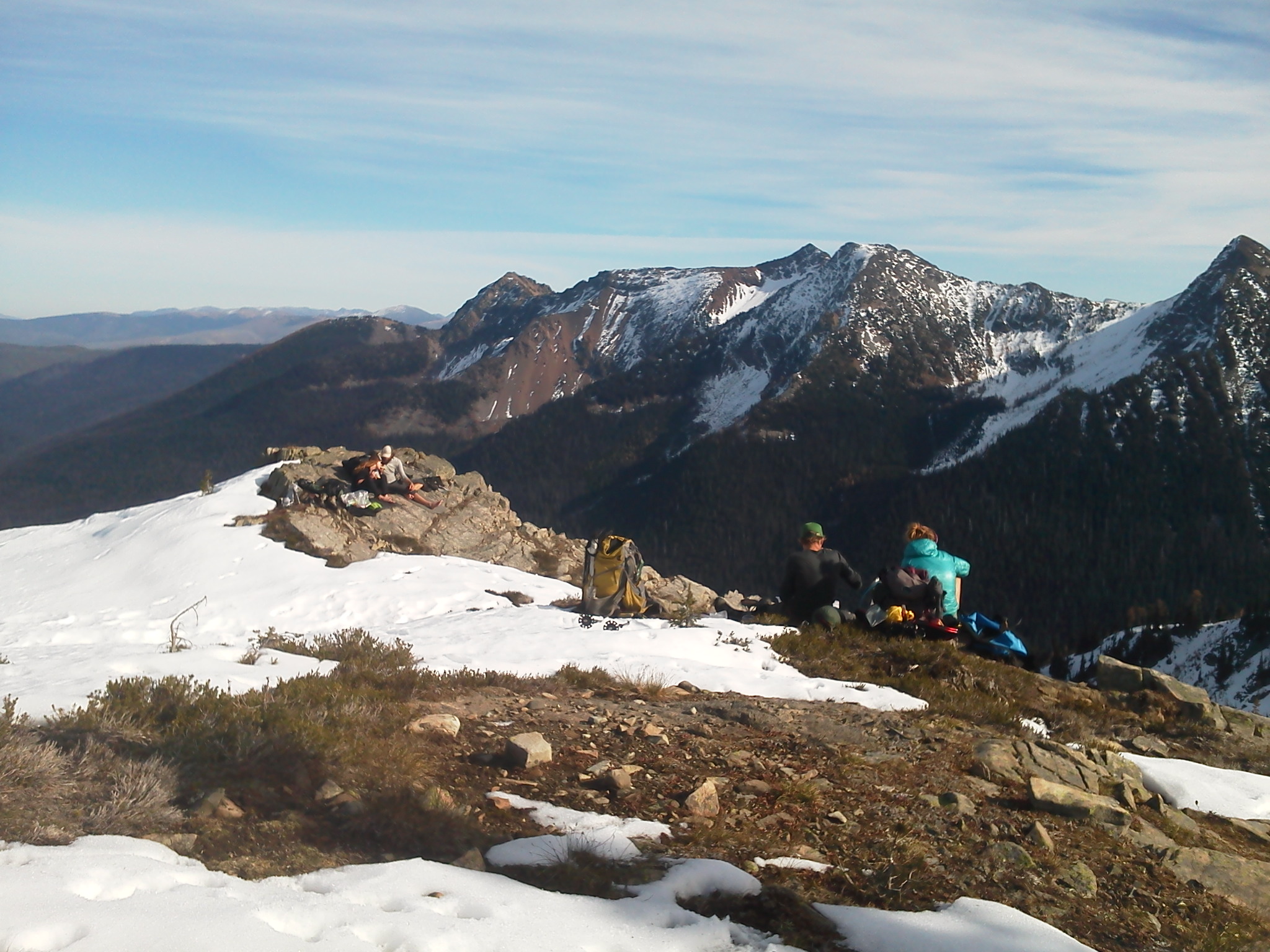 “Dog Down! Dog Down!”  SupDog enjoyed rolling and cartwheeling on the snow to cool down from the glaring sun… 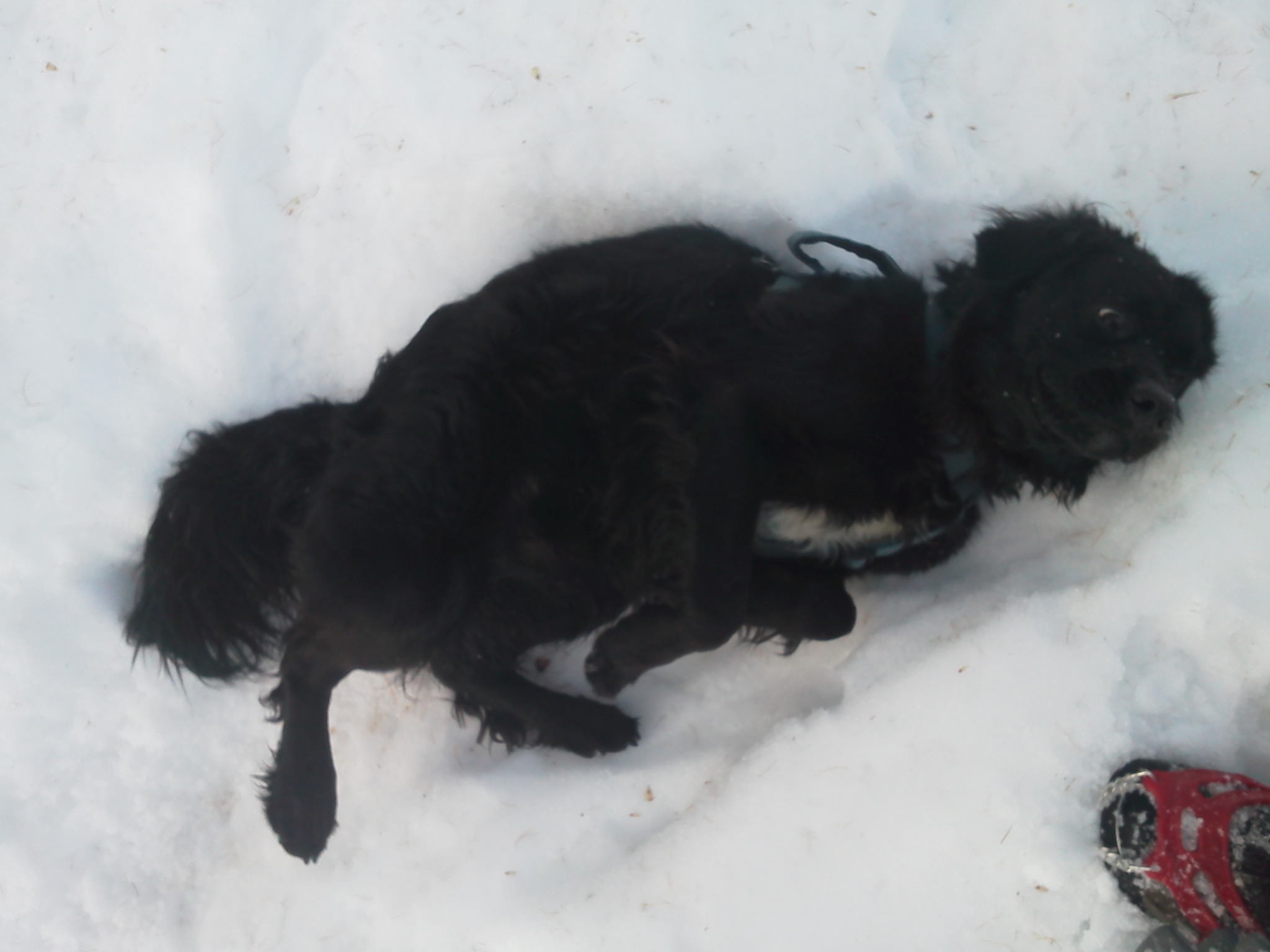 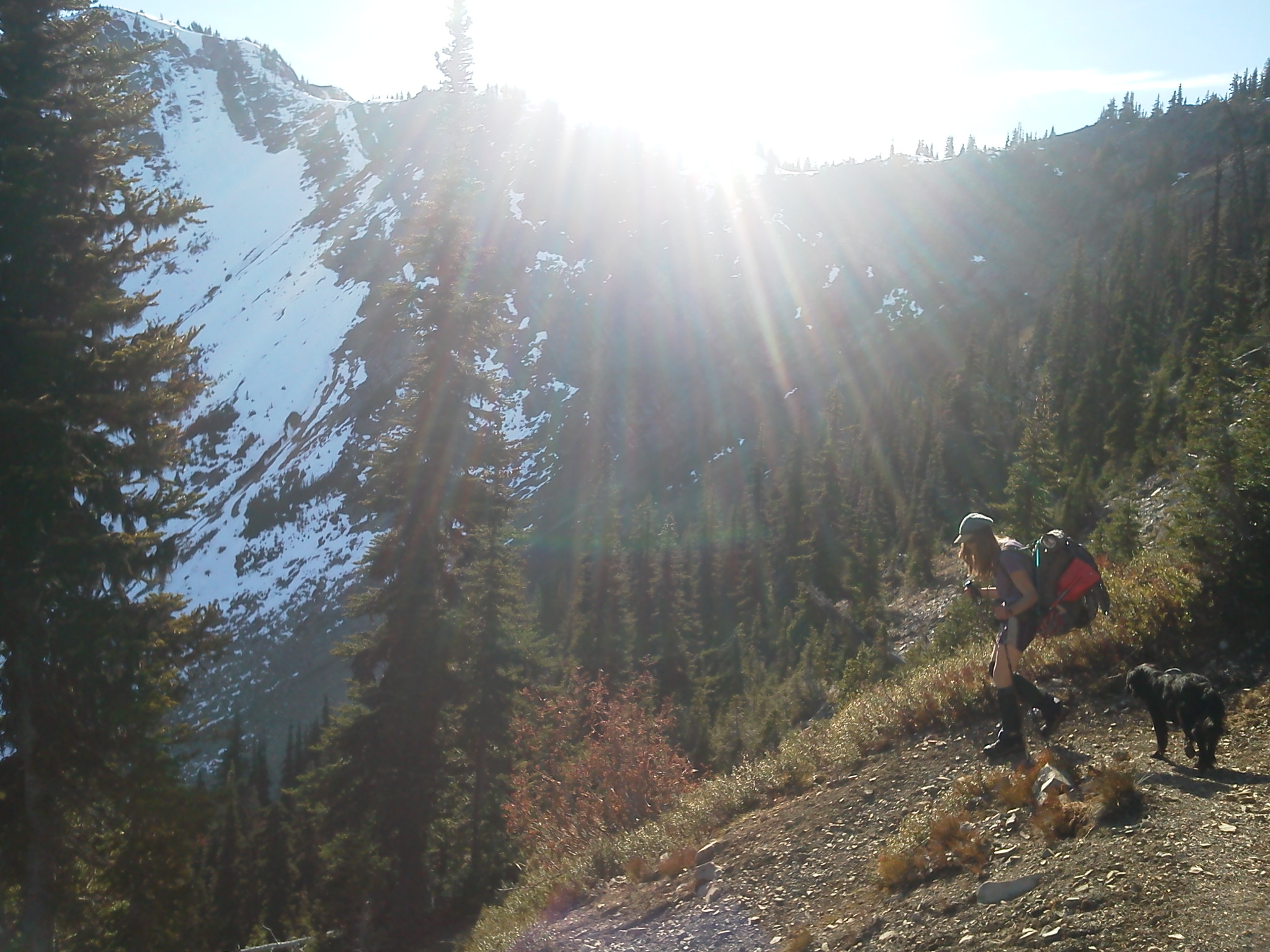 We were getting close to the monument!  SupDog had a lot to celebrate, he had hiked 1600 miles in the 4 months that he traveled with us!

The monument area itself was cold and shady… but it was the end so we stayed for an hour until the other parties arrived.  We camped a quarter mile into Canada and returned in the morning to wait for Outburst and 30-pack.  We also met Outburst’s father who had driven to Canada and hiked 8 miles South to meet her at the monument.  By lunch we had a grand finale at the Canadian border… and then hiked out to Manning Park Resort where we spent the night and returned to Seattle the next day. 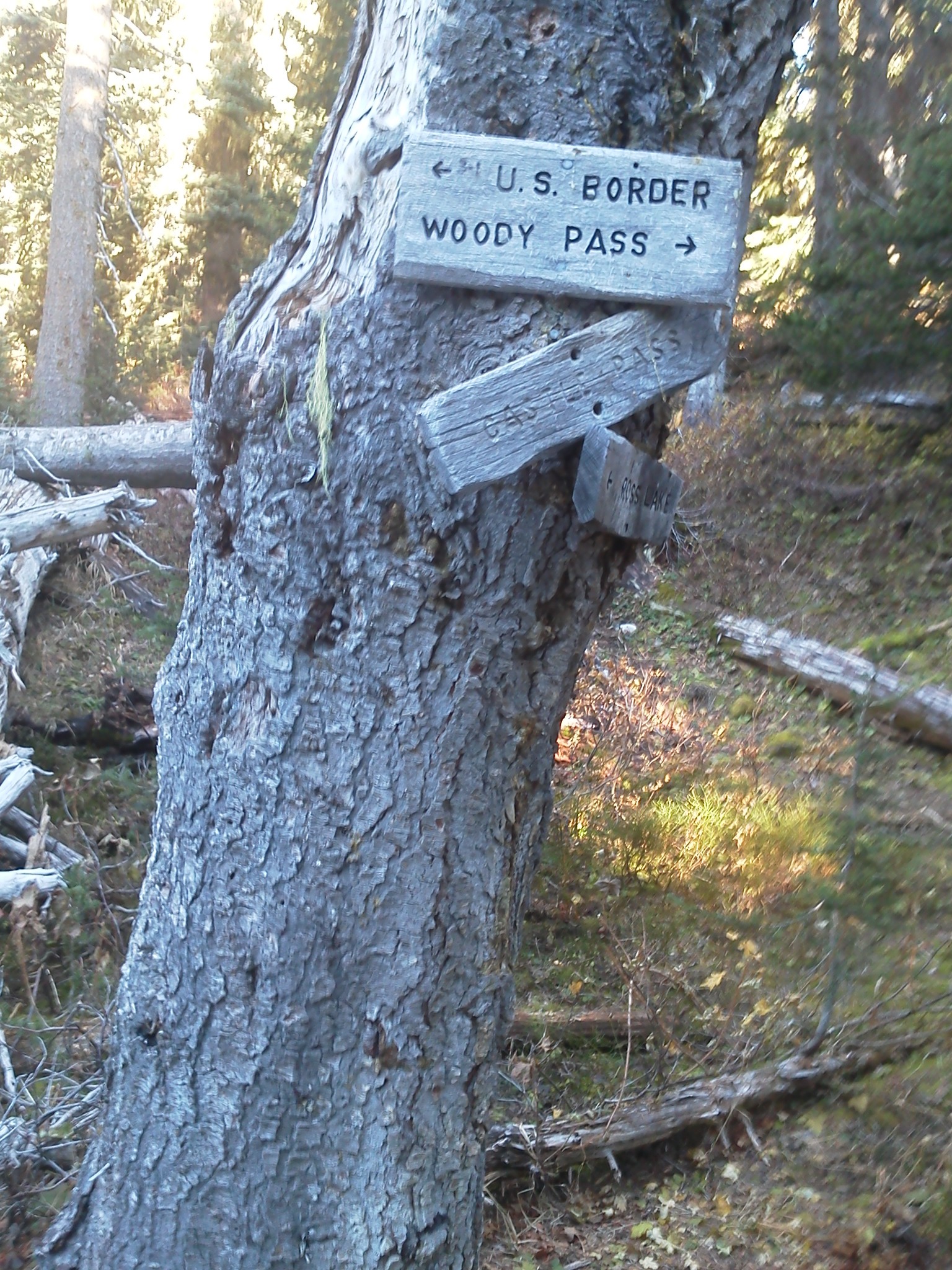 Welcome to Canada! Trailhead parking is 8 miles away..what? doh! BUT whats another 8 after coming 2660.6… 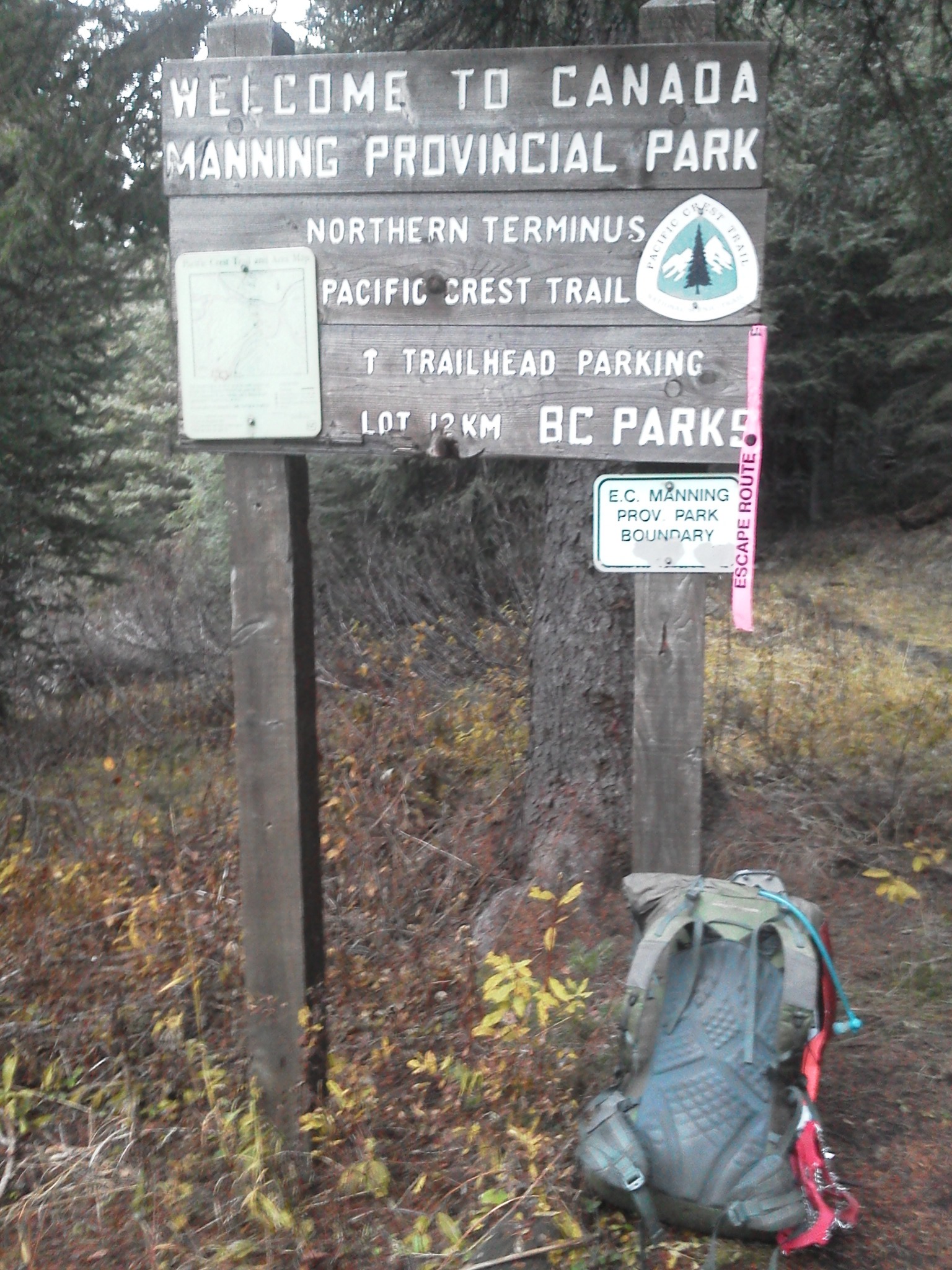 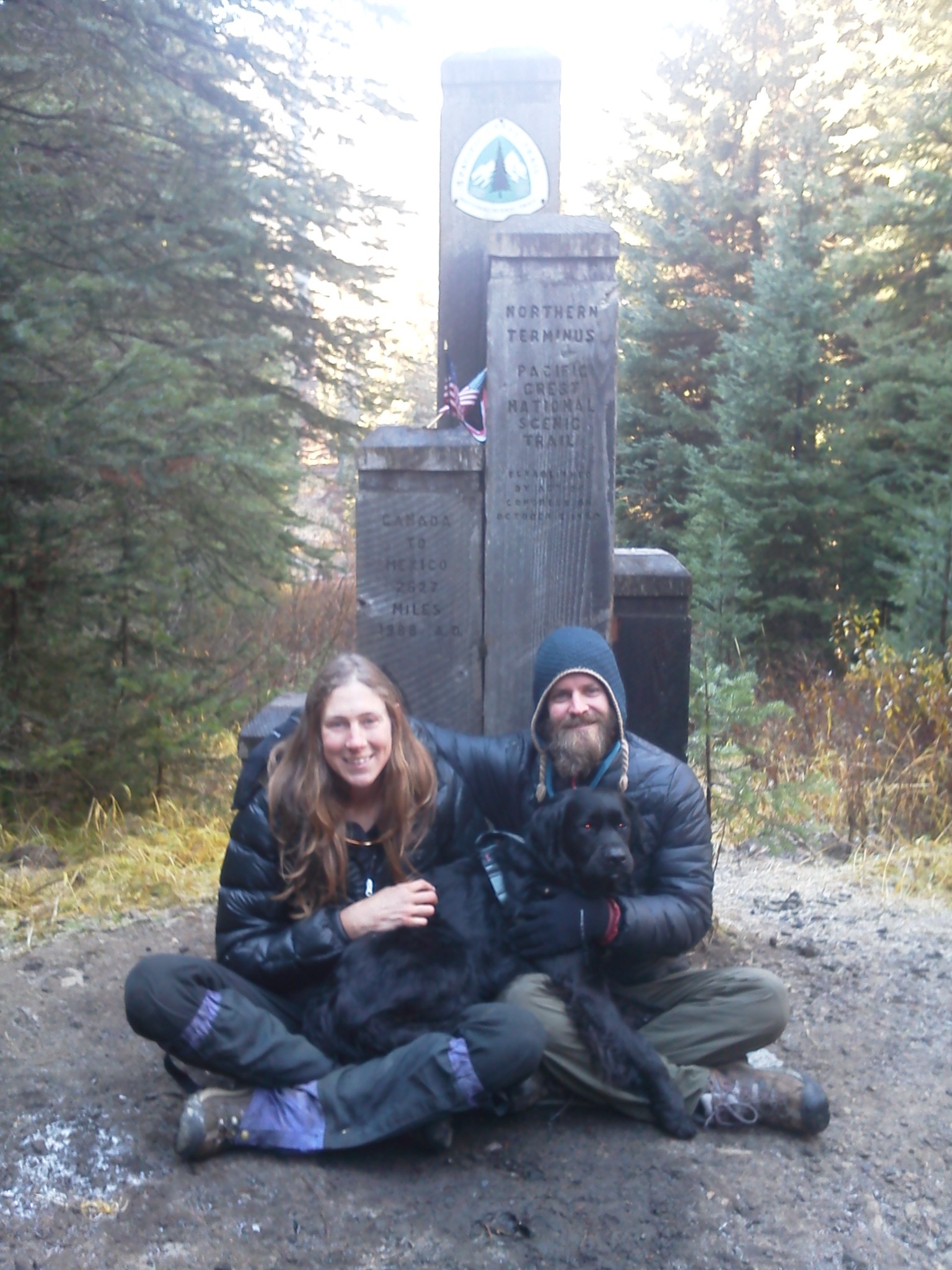 That was our hike!  We finished on October 25th, 6 months and 9 days after we started.

See a ton more photos of the Monument in the next blog post!